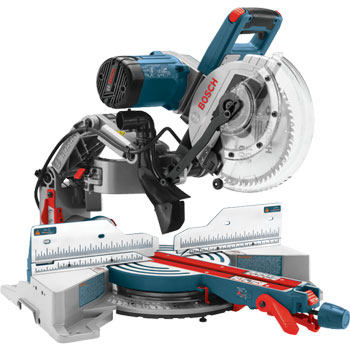 Bosch CM10GD is a 15 amp corded 10” dual bevel sliding glide miter saw. With a 60 tooth carbide saw blade, this miter saw includes several user-friendly features that can perform accurate and precise cuts. With a one year warranty, Bosch has created a miter saw that showcases the Axial Glide System. Alongside having a wide range of angles for its miter detents at 0, 15, 22.5, 31.6 and 45 degrees on the right and left with 60 degrees on the right, users have some versatility when using this miter saw. Not being a lightweight saw, weighing in at 78 lbs. it is an electric, corded 120 volts of power.

Don’t forget to check out our roundup of the high-quality compound miter saw reviews!

Bosch has created an electric, compact miter saw that can work for the DIYer as well as the professional. With its 120 volts and 4800 RPM power, this 78-pound saw has an array of smart features that users can really use to their advantage. With an exclusive Axial Glide System, bevel glide, 60 tooth blade along with bonus features such as material clamp and dust bag; it seems as if Bosch wants to ensure its users’ needs are covered. The few drawbacks with this Bosch would be to improve on its existing features. Improving on the bevel glide system would allow it to move in more directions so the user is not limited to what they can cut. For the overall design, just improving on their dust collection concept and adding features that support more accurate and precise, may make this model top in its category.