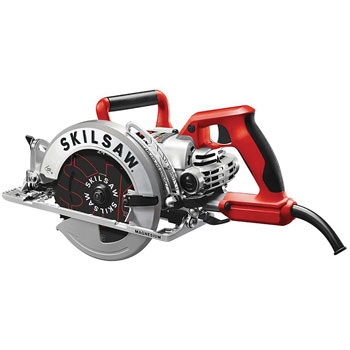 When it comes to tackling framing jobs, there are certain saw types that were created just for that job. Being able to maneuver your saw skillfully to get the precise cuts not only requires some experience and patience on the user’s end, but it also requires a durable tool.

The Skilsaw 15-amp Lightweight Worm Drive Circular Saw is a corded, all-magnesium saw that gives off 120 volts of power to accurately cut through materials. Weighing at 11.6 pounds, it features a comfortable handle and comes with a 24 tooth carbide tipped Skilsaw blade. A powerful circular worm drive saw with on-tool multifunction wrench and a 7-1/4 inch saw, this power tool has an equal amount of pros and cons to consider before purchasing.

A circular saw of this size has its share of pros and cons. The all magnesium saw was built to be one of the lightest worm drive saws for user’s to select. The 15-amp dual field motor keeps the motor cool over an extended period of time. In addition, the anti-snag feature protects the blade and is the reason this Skilsaw can perform thinner woodcuts. In spite of some smart technology, there are some drawbacks such as durability of its parts and some more user-friendly additions such as a rip guide and dust collection port. Overall, if a portable saw such as the Skilsaw is ideal for both the professional and those that have infrequent needs for the worm drive circular saw.