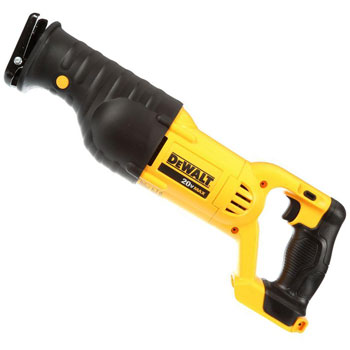 The Dewalt reciprocating saw has increased blade control and gives a faster cut speed. With features such as their pivoting, adjustable shoe and a user-friendly rubber grip, Dewalt has made a convenient, yet powerful saw.

Read on to find more details on choosing a reciprocating saw.

The Dewalt DCS380B reciprocating saw is a 20-volt, battery-powered tool that has features that are user-friendly. From the grip being rubber over-molded for comfort as well as durably sealed shaft, this Dewalt reduces user fatigue. This Dewalt gives 1-1/8” stroke length and the blade control is increased to provide faster cuts. The powerful motor kicks out 3000 strokes per minute and can cut accurately through various materials. The downside to this Dewalt reciprocating saw is that it is still battery powered. The limitation here is that the battery charge time is approximately 30 minutes. Just like any other battery-powered tool, the more battery life the saw has the saw will operate with more precision and power. While an alternate around this issue would be to get a bigger battery, this does seem to drain more power. The Dewalt would be best for those simple, lightweight jobs.