Skip to content
This article contains affiliate links. If you click on these and make a purchase, we may receive a small percentage of the sale without any additional costs to you. Read our privacy policy to find out more.
Contents show
1. Intro 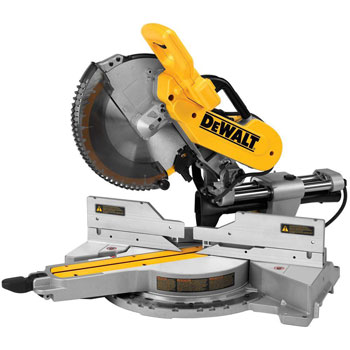 Dewalt has designed a compound miter saw with 12-inch blade and sliding capability. This manageable power tool can work for both the professional as well as the individual that only plans to use the miter saw a few times per year. The corded compound miter saw has a 15-amp motor with 800 RPM. With a carbide blade, back fence design, blade wrench, dust collector and a Cutline Blade Positioning System; this compound miter saw is contending to provide the most precise and accurate cuts.

A three-year warranty included, the Dewalt Sliding Compound Miter Saw is able to perform miters 60 degrees to the right and 50 degrees to the left. Weighing at 56 pounds, Dewalt did not spare on any user-friendly features such as including ease of use with a linear ball bearing and dual horizontal steel rails. With so many different brands to select, the Dewalt brand has brought about a saw that includes several attractive features.

Read on to find out what you need to look out for when buying a miter saw.

Dewalt has created a miter saw with a few features that makes it a convenient and easy choice for users. With its Cutline Blade Positioning System, the cut lines are more visible and made to give the user the best guidance when in use. The extended power and durability of this tool from the 15-amp motor allows the user to really perform some precise cuts. Like any power tool, it has its drawbacks. In particular the non-soft start and a few design flaws regarding dust collection and storage. At this price point, the Dewalt Sliding Compound Miter Saw is a solid purchase and with its three-year warranty, users have the confidence in knowing they are receiving a quality tool.