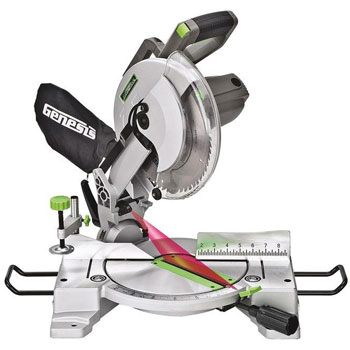 There are projects that a compound miter saw can easily handle and many users find that the Genesis 15 amp 10-Inch Compound Miter saw is a go-to option. With features such as the 60T carbide blade, hold-down clamp, dust bag, two extension wings, and blade wrench; this compound saw seems to handle small jobs quickly and accurately. At just 24 pounds, the Genesis is easy to move around and the user can get to many projects in and around the home.

To check out in-depth reviews of all the latest models head over to our sliding compound miter saw reviews.

Purchasing a smaller power tool for convenience will always have its pros and cons to consider. The Genesis Compound Miter Saw stands out for users due to its price point and size, but it should be purchased with the mindset that it is ideal for those smaller, simpler projects. The Genesis has features that makes it extremely likeable for the DIY such as the extension wings, blade wrench and 60T carbide blade. While some of its features have their shortcomings, such as the dust bag and the clamp not built for heavy use, if the user is in the market to add to their power tools collection with a simple compound miter saw, the Genesis brand would be a simple purchase with its ease of use.