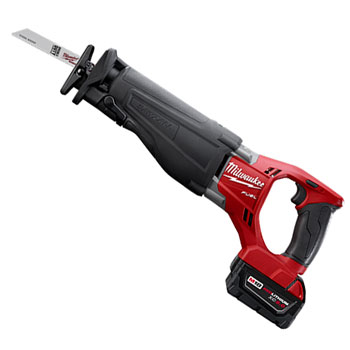 This battery-powered Milwaukee Sawzall is a M18 fuel reciprocating saw. Reciprocating saws are necessary when needing to cut different types of materials that need power. These saws are easy to transport. At 11.42 pounds, the Milwaukee Sawzall is battery powered at 18 volts from its Milwaukee brand only “Redlithium” battery has extended life, giving the user more power. The Milwaukee Sawzall comes with adjustable shoe, integrated LED light, rafter hook for convenient storage and blade release lever. The Milwaukee brand has consistently brought durable tools to the market. Their Sawzall has features that help make this a great addition but also there are a few parts of the saw that could be considered a challenge.

But, how do you choose a sawzall from the hundreds on the market? Here are our top tips.

Milwaukee is a trusted brand that has been around for years supplying woodworkers with reliable tools. With its “Redlithium” branded battery promising longer run times and enhanced power, the Milwaukee Sawzall has been considered the fastest saw in its category. The brushless motor and blade release lever are just two of the features that makes this saw durable and easy for the user to operate. There are some shortcomings in missing a cutting shield and just being a cordless saw. Milwaukee Sawzall is heavier than most but the power that this cordless saw has is comparable to many corded reciprocating saws.